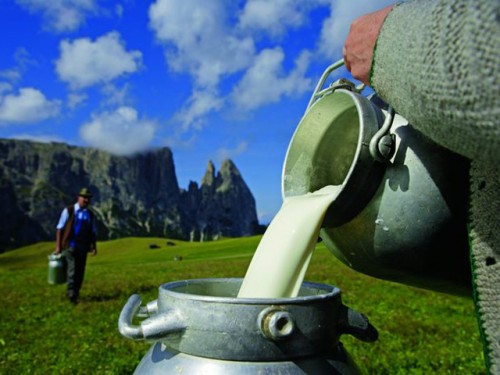 “Today bavarian milk producer are buying milk at 34-35 cents/kg, our goal is to obtain around 40 cents/kg, like in your country” says the Bavarian Minister of Agriculture, Helmmut Brunner to Clal.it. If we point out that price in Italy is over 44 cents he immediately rectifies “So 44 cents/kg, like in your country”.
He is in South Tyrol to visit the regional agricultural realities and to meet the assessor of the autonomous province of Bolzano, Arnold Schuler, with a view to intensify the dialogue to enhance the Alpine region mountain agriculture. The minister recognizes the volatility of dairy market.
“Last year crisis has led to the closure of 10% of the bavarian stables – says Brunner – and the bigger companies have suffered more than the smaller that have been able to react quickly and with more flexibility. It means size isn’t everything”.
The volatility is an aspect that need to be monitored. “A year ago – says the minister – we didn’t expect a price so high”. The increase in prices is due also to the decrease in production and to the increase in chinese imports. If Bavaria (and Germany)  don’t take actions for farmers to control milk production, the chinese market is considered an interesting market.
The minister declares his availability to start a cooperation between Bavaria and Lombardia in order to strategically join the organization to the big dairy Dop to build an international battleship. “Chinese market is very attractive, but volatile – he says – Today costumer interest is different: he is looking for animal fat in milk and he is willing to pay for it. A dialogue between Bavaria and Lombardia could be useful not only on the exports,  but also for relaunching policies in mountain agriculture”.
For the next year, even if it is impossible predict the market evolution, “it will be essential to improve exports also in view of an increase in world population”.
For the minister Brunner there is space for taking about Pac “the priority is to confirm 38% of the european balance for agriculture”. It is a hard purpose since the commission seems intent on reducing funds for primary sector, due to Brexit.